About Us – Our Parish

We work together to develop and promote the parish in many different ways, some formal some informal. Our formal structures include

A printed guide explaining our church in detail is available in the building. The Church was opened inn 1965. The Blessed Sacrament Chapel was created in 1990. The Narthex was redesigned in 2015.

– from TAKING STOCK [Catholic Bishops’ Conference of England and Wales]

A large church of the mid-1960s by Desmond Williams & Associates. The design is functional, with the internal character of a secular hall. The church lacks the special interest of the contemporary church at Dunstable, by the same architects.

The church was built in 1963-4, from designs by Desmond Williams and Associates of Manchester, who were also responsible for the church of St Mary at Dunstable, built about the same time. The contractors were Willis  & Dawson of Leighton Buzzard, with initial costs set at £51,377. The final cost came to more than £80,000. The church was built on a bowling green which was bought by the parish in 1961 for £3,925. Two houses on Westbourne Road were also purchased. One of these was knocked down to provide access to the new church and the other became the presbytery. A car park was a requirement of the local authority, and was formed to the south of the church using parcels of back garden purchased from neighbours.

To suit the small site the church was designed in the form of a square, with shallow transepts. The building has a reinforced concrete frame, clad in brick. A projecting west entrance has three large, arched windows containing stained glass. This leads to a wider, full height narthex with a copper spirelet. Beyond is the large nave, at the east end of which are shallow transepts and the sanctuary. Beyond this a lower building houses the sacristy,  kitchen, WC and stairs to a storage room above the Blessed Sacrament chapel (in the south transept).

The porch and the main body of the church have brown brick walls under a shallow pitched roof. The walls are relieved by a series of windows set into the brickwork in linear patterns. The emphasis is principally vertical, apart from a horizontal strip of windows which form clerestory windows high in the nave. Inside, narthex holds a small seating area, a repository and access to the west gallery. The gallery front is of slim, vertical timber batons, with a circular  painting  of  a  dove  in  the  centre.  The nave  roof,  shaped  in  a  zig-zag, is supported on each side by a series of brown brick piers pierced with arches at the base, to allow for perimeter circulation (as at Dunstable). The nave floor is carpeted, with plain, varnished benches. Part way along the south wall of the nave is a flat-roofed, single-storey space with two confessionals and a central shrine to Our Lady. This space is included in the original design, as illustrated in the Catholic Building Review (1962).

The Blessed Sacrament Chapel was created in 1990 by enclosing the south transept with part-glazed walls. In the north transept is an organ bought in 2005 from a chapel in Wales, at a cost of £35,000. Behind the sanctuary is a wide curtain, obscuring a painting of the Holy Spirit, Our Lord and the Disciples, and also  the original clerestory roof. The current sanctuary arrangement  dates from 1984. All the windows in the church contain coloured glass in narrow bands.

Our Shrines to the Holy Spirit

JUBILEE ICON OF THE HOLY SPIRIT

To celebrate 50 years of our church building we commissioned an icon of Pentecost to honour the Holy Spirit, the dedication of the church and parish. An icon is “written” not painted, and producing an icon is always done in a spirit of prayer and contemplation. Sister Mary Stella, of the Bernardine Monastery, Hyning, accepted our commission. She wrote about the work:

Our icon shows Mary and the apostles gathered in prayer, with the three women who went to anoint the body of Jesus in the tomb on Easter Sunday. They receive the power of the Holy Spirit from on high. Above is the sign of God’s mysterious presence, and below is the cosmic earth, where God’s Spirit is constantly at work.

Only natural elements are used in the “writing” of the icon to show that it is indeed part of God’s creation. The iron candle holders were made by John King, a traditional blacksmith, of Clifton, Bedfordshire.

A more detailed commentary on the icon is available in church. 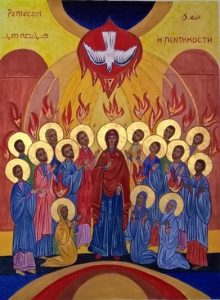 We asked Maia-Rose Cahill to design and execute Jubilee murals for our garden. She writes about them to explain the design and their meaning.

“I have completed 2 paintings to represent Pentecost the Holy Spirit because of the link with our Parish. I have used a stained glass window effect to create the paintings rather than a more traditional painting style, as it feels more connected with our Church building and all its beautiful stained glass windows.

On one, I have used an Italian tradition where rose petals are dropped from the ceiling of churches to emulate the tongues of fire that filled those in the Upper Room with the Holy Spirit. The 5 petals are 1 for each decade of the Holy Ghost Parish on its Golden Jubilee, and also for the 50 days from Easter to Pentecost.

For the second painting, I have taken a more popular approach to the theme of Pentecost, using flames filled with a dove to represent the disciples being filled with the Holy Spirit.” 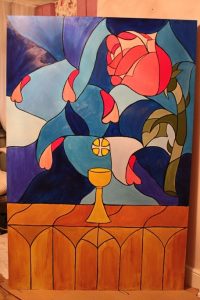 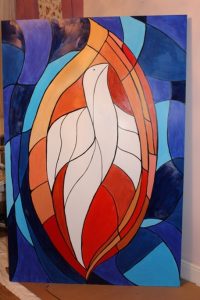 It was built in 1903 by the fine organ builders, Messrs Wadsworth and Bro of Manchester, a firm founded in 1860.

Peter Collins of Melton Mowbray, who has rebuilt the organ for us, with John and other dedicated craftsmen, wrote when he first told us of the organ –

“The instrument is extremely well made with adequate dimensions for the load bearing parts, the mechanical parts and robust and tubing for the pneumatic action is of good section.  It is many years since the organ was overhauled and the major parts: windchest, pedal chests, bellow and off notes are still with the original leather, a tribute to the quality of the original construction.  The case is of quality pitch pine with the northern feature of specially figured panels, a very attractive decorative device.  Ther are return panels to soffit level at each side of the instrument again in pitch pine, with large pedal pipes planted on top.  The panel and pipes on the left hand side are rather discoloured as they have been close to a wall for about one hundred years….  The instrument is a fine one, our craftsmen would be delighted to be part of its history”.

As a parish we are so grateful to Peter, John and all who have been involved with the  restoration and installation of the organ for us.  Their skill and attention to details was inspiring.  Our thanks also to Dr John Rowntree, who is the organ consultant to the diocese and to the congration of Connah’s Quay for sharing the gift with us.